She turned to jazz, co-founded the jazz-funk band Skinny Cooks - but brought along her cello. 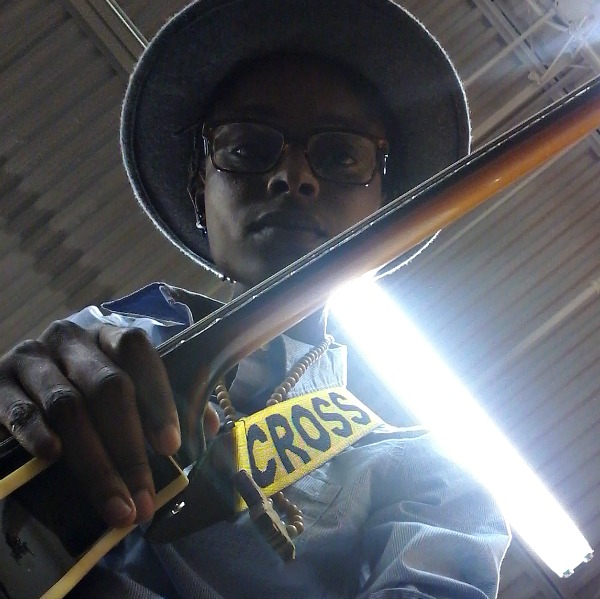 Playing cello from the time she was in Greiner Middle School in Dallas, Brianne Sargent followed classical music through the DSO's Young Strings program all the way to the acclaimed Interlochen Arts Academy in Michigan. But at Baldwin Wallace University in Ohio, she got hit with jazz in a big way. Picked up the electric bass, learned to improvise. And now she's co-written some 120 songs for Skinny Cooks, the jazz-funk fusion band she co-founded with band-mate / writing partner Nigel Newton. Set your ears on 'simmer' and take a listen.

Classical cello is what Brianne Sargent learned at Booker T. Washington Arts Magnet. It’s what she played with the Dallas Symphony’s Young Strings program. It’s what she studied at Interlochen, the esteemed arts academy in Michigan.

But it’s not what the 29-year-old songwriter-musician plays today with Skinny Cooks, her jazz-funk fusion group that’s got creamy vocals over slow groove rhythms, spacey melodies and off-kilter shifts. That jump from Bach to funk came late for Sargent – and a little sudden.

As part of the Soluna Festival, Brianne Sargent performs in ‘Dallas Dreams Big’ Tuesday at the Latino Cultural Center. Starting June 4th, Skinny Cooks will play every Sunday at Sundown at Granada through the summer.

“I didn’t know anything about jazz when I was in college,” Sargent says. “Like, nothing. My sophomore year, my college buddies, they were like, ‘Who do you listen to?’ I dunno. Kenny G? They were like, ‘But who else?’ ‘Well, that’s it, isn’t it?’ she says with a snort. “That’s jazz, right?”

Sargent grew up in Pleasant Grove, her father played drums in church, her mother and aunts sang gospel. That and classical was pretty much all the music she knew. So her college buddies promptly gave Sargent an immediate, immersion course in John Coltrane and Ornette Coleman and Stanley Clarke. “They locked me in a practice room for like a weekend and force-fed me jazz. And I’m grateful they did, really.”

In fact, soon after, Sargent picked up the electric bass: “I fell in love with it my senior year in college so I’ve been playing it ever since.” For one thing, as she says, they don’t teach you to improvise in classical music. “Tell a classical musician to improvise and he’ll most likely just look at you.” Now she was learning to wing it.

Even so, Sargent’s classical training still stands out. Skinny Cooks has a highly unusual set-up onstage. You don’t typically see a band with a cellist front and center. The cello has been gaining a bit of shiny pop presence lately with groups like the goth rock trio Rasputina, the ‘cinematic rock band’ Break of Reality and, of course, the hunky, wildly popular, Croatian, prog-rock duo, 2Cellos.

But in a whole century of jazz, there haven’t even been a dozen well-known cellists, let alone a jazz-funk fusion cellist who’s also a singer-songwriter-keyboard-player and bandleader. (Many people may think they’ve seen a cellist in a band. Most likely, that was a stand-up bass, a much bigger instrument. They call it a stand-up for a reason; the cello you play sitting down. Sargent says she can barely even carry a stand-up bass).

And then there’s the music Sargent helps cook up for Skinny Cooks – with all its time changes and oddball chords.

“A lot of the stuff she writes doesn’t even have a jazz equivalent,” says Nigel Newton. “Like, that’s not a real jazz chord, that’s just crazy, y’know? And so when we give the music, especially to guitar players, they’re like ‘What? What is that?'”

Newton is Skinny Cooks’ co-founder and co-composer. The band’s name comes from the saying, ‘Never trust a skinny cook’ – and from the fact that Sargent and Newton are both so rail-thin, they look like they’re kin. They both have fantastically long, lanky fingers. One reason Sargent took up the cello: When she was playing the violin, her long fingers kept making her notes go sharp.

But while the two may look alike, they come from way different backgrounds. Sargent was classically trained; Newton got a degree from Boston’s Berklee College of Music – in jazz composition.

“But it works well,” Newton says of their creative collaboration. “We sort of fill in each other’s gaps. And it’s like a very good combination.”

That mismatched combo clicked from the get-go. Newton visited Dallas in 2011 to see his ex, who turned out to be friends with Sargent. Newton plays vibraphone and keyboards, so he and Sargent started jamming. That went so well, they set up their first gig at Ferralog Recording Studios in Deep Ellum.

“It all kind of wrote itself,” Sargent says of their first set. “It’s hard to explain. But the guy that was playing drums with us, he was like, ‘What are the names of those songs?’ ‘I dunno. We just kinda made all of these up.’ We had already written six songs together and we barely knew each other.”

If the cello is an oddity in a jazz fusion band, the vibraphone is one of the quintessential jazz instruments (think Lionel Hampton and Milt Jackson). You almost never see it played in anything else: rock, Latin, blues, hip-hop, classical or country (a situation Newton devoutly hopes to change). So Skinny Cooks’ basic orchestration, cello and vibes, already sets the group on its own peculiar course. Sargent and Newton’s song styles vary wildly but the band’s silky, quirky sound lies someplace where Steely Dan’s jaded ironies and jazzbo harmonies meet Stevie Wonder in all his spacey, late-phase inventiveness. (For her own vocals, Sargent says she’s been listening a lot to that mellow-but-passionate mix Marvin Gaye and Al Green could pull off with apparent ease.) When Sargent and Newton sing together, even their voices chime. Throw in Aisha Marshall’s vocals (she plays flute), and it can be hard to tell one voice from another, it all sounds so smooth.

In the five years since Sargent and Newton teamed up, Sargent says they’ve written around 120 songs. Four years ago, they released a three-song EP, ‘Day Beulah.’ Last year, they released a five-song collection called ‘Soul Token.’ Another EP is in the works, plus an animated video.

And Sargent made a big decision. She says she was getting enough work with Skinny Cooks, playing bass with other groups like Melody Memory and the Magga Orchestra (a regular Wednesday gig at the Balcony Club), plus even doing weddings with Serenata Strings — with all that, she decided it was time to get out of her comfort zone – once again – and take a risk.

“Comfort,” Sargent says, “is not something that one can keep – when they’re trying to achieve something bigger than them.”

In February, Sargent quit her day job in data entry. She’s a full-time musician now – with all the financial risks that entails.

So what was your day job and why did you give it up?

I was in customer service for a while, I did mortgage for about three years and then went to auto data entry. And I got tired of it. You know, the gigs started to roll in, and they began to conflict with my day job schedule.  So I was, like, ‘Well, I mean, if this is theoretically what I went to school for, then I should be able to make a living off of it.’ Granted, that’s not something you can do straight out of college most of the time unless you get lucky. You land a major orchestra job straight off the bat. Or teach, and I’m not much of a teacher. Most of the battle is with myself. I just got sick of [the job]. I couldn’t handle it anymore.

Second week of February. This year.

Getting out the iPads. Max Oepen explains a tricky bit of dotted-eighth notes to Sargent, Newton and Robert Trusko (bass player, back to camera). Photo: Jerome Weeks

Oh. So you just gave up your day job. Is there anything else you’ve given up to pursue being a musician, a songwriter?

Five years ago, if you asked me that question, I probably would have responded negatively. But now, I know what I’ve had to give up is my comfort zone. Comfort is not something that one can keep if they’re trying to achieve something – to sound cliched – something bigger than themselves.  Even when I went to Interlochen, I knew then I wasn’t going to choose the same path as people around me. Most of my colleagues at that school are either in movies or major symphonies – I didn’t want to go that route. That route had been paved centuries ago. I wanted to do something else, and I wanted to set an example that had not been set for me in terms of a career.

‘Rock star’ had always been in my mind even when I was a kid, but the avenue to get there, I’d not really figured that out. But even when I didn’t know what to do, I knew I could not stay in my comfort zone. Improvising – even if it’s just playing some hard jazz, just playing something that’s not on the page – it can go either right or wrong. But whichever direction that it goes, improvise and get yourself out of it. That’s music, that’s life.

So I’ve had to give up my comfort zone. Not only in performing, but money. Nigel and I have had to walk away with nothing at times just to make sure the rest of our guys get paid.

For performances specifically, I need to be alone for at least five hours before the performance. I need my own box, I don’t want anyone talking to me. And I don’t want to be bothered. I just need to be alone. And when I’m alone, a lot of times, I do something completely unrelated to my performance. Most times, I watch TV, something really mundane. Or I wash dishes. Or I just sit outside for five hours. But I kinda like the dichotomy of leaving something and then going back to it.

Along those lines, when I’m practicing, it’s pretty much the same regimen except it’s two hours not five hours. I’d be in my practice room all day if I did that. But I need at least one or two hours alone and I either watch TV or I do something completely unrelated to what I’m about to do. That’s just so I can make sure my brain works. That way, I can turn it back on for my performance or my practice.