Fort Worth's Lone Star Film Festival has launched a new initiative called 'Cine-Más.' It's sort of a festival within a festival. And it features films that shine a light on the life and culture of Latin and Hispanic people. 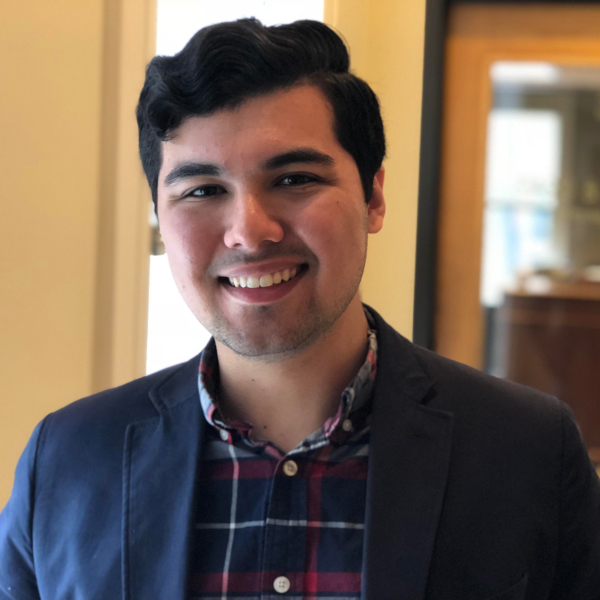 Gabriel Gutierrez is the director of programming for Cine-Más. Gutierrez spent over 200 hours watching films made by Latin and Hispanic filmmakers in order to curate the festival. The 23-year-old film enthusiast is also helps program the Lone Star Film Festival and is proud to bring diverse stories to his native Fort Worth.

The Lone Star Film Festival celebrates Latin cinema with a new initiative called Cine-Más! This new portion of the festival features films that share the art and cultures of the Latin and Hispanic people.
Photo: Cine-Más logo

The 12th Annual Lone Star Film Festival has acclaimed feature films, short films, panel discussions and so much more. Check it out through November 11th. For a full lineup and description of the films screening during Cine-Más, scroll below the story.

Hispanics and Latinos make up 25-percent of the movie-going audience in the United States. Yet they’re rarely represented on the big screen. In this week’s Art&Seek Spotlight, Hady Mawajdeh tells us about Cine-Más – a new film festival in Fort Worth that celebrates work by and about Latin and Hispanic people.

Comedian Aziz Ansari has a pretty funny take on the alarmingly large number of movies that are about or staring white people:

“Yea! It’s very hard to see a Latin film here because you either have to go to Dallas or maybe you wait till Magnolia screens it or (pause) I don’t know!” says Gutiérrez.

Because he can’t find Latin films in theaters, Gutiérrez is forced to watch a lot of movies at home. But he says there’s no better way to watch a movie than in a theatre.

“The big screen is there to engulf you,” he says. “Being in the theater like, it’s forcing you to live it; in that moment. And I think at home, you know, with the convenience to pause it and do whatever you want, I think it takes you out of that.”

“For a time there, I think we were just overlooking a segment of our population that is growing tremendously in Fort Worth,” Mathews explains. “And so we wanted to welcome the Hispanic and Latino community. And this is our first step towards it.”

Cine-Más is part of the five-day Lone Star Film Fest, a festival within a festival. It features movies by filmmakers from countries like Mexico, Columbia and Argentina. Some may contend for a foreign film Oscar next year.

“These are great movies from around the world. From light fare to some really fun music documentaries to then some dramatic narrative films; I mean if you were to read the synopsis and see the movies that are listed, they’re attractive stories for everyone,” says Mathews.

Almost all the films are in Spanish, with English subtitles. But other than that, Gutiérrez says there’s no real difference between Cine-Más and Lone Star.

“I just wanted the ability to give the Latin community here more accessibility to these films to see what our culture is producing” Gutiérrez says.

Gutiérrez is first-generation Colombian American. He wants to connect Latinos with their cultures.

“You know, while we have a strong sense of togetherness here,” he says. “I think we need to also see just what is going on in our in our native countries. And just be able to celebrate it and experience it.”

Paul Espinosa‘s documentary “Singing Our Way to Freedom” is screening at Cine-Más. It’s about Ramon “Chunky” Sanchez, the Chicano musician and activist who often performed at Cesar Chavez rallies.

“Given that Latinos are now 1 in 6 Americans, I think we see far too little work,” Espinosa says. “So certainly Latino Film Festivals like Cine-Más are very important in terms of bringing this work to audiences that might not get a chance to see it otherwise.”

Gabriel Duran agrees. He’s a filmmaker and instructor at the University of North Texas. He’s also the CEO of the Festival De Cine Latino Americano in Denton. Duran says he’s glad larger film festivals like Lone Star are reaching out to the Latino community.

“We are a very high percentage of ticket sales at box offices, so you cannot not see that and not understand that we are a powerhouse when it comes to purchasing power,” says Duran.

Duran is right. Latinos represent around 18 percent of the US population. But they buy 25 percent of all movie tickets, according to industry reports.

Breakdown of frequent moviegoers via the Motion Picture Association of America

Hollywood has embraced a few Latino filmmakers, like Alfonso Cuarón and Guillermo del Toro. But Gutiérrez says those men can’t represent the global Latino experience on their own. He hopes Cine-Más can make a change, at least regionally.

“I want to at least bring Latin films and culture into the mix of what you can see, besides what is the next big blockbuster that’s out in theaters,” he says.

Gutiérrez has big plans for Cine-Más, like filmmaking competitions. For now, he hopes he’s crafted a festival that’ll make Latin and Hispanic people feel at home.

A cross-cultural story of one man’s journey toward identity, AMERICAN CURIOUS goes across the border with David Green, an adopted man who learns that the birth mother he never knew has just died and left him her restaurant – and that she was Mexican.

A young man must-as a last resort-kidnap his own newborn daughter to prevent her custody from falling into the wrong hands. Outrunning the authorities, he sacrifices his American citizenship and career by retreating to Europe after leaving his child in the care of his close friends in Mexico. Decades later, he must find a way home-whatever the cost.

Latin American icon Ruben Blades was at the center of the New York Salsa revolution in the 1970’s. His socially charged lyrics and explosive rhythms brought Salsa music to an international audience. Blades has won 17 Grammys, acted in Hollywood, earned a law degree from Harvard and even ran for President of his native Panama. He lives in New York, where he shares his life at home and on tour with the camera. Critically acclaimed director Abner Benaim takes us on a journey through Ruben’s 50-year career, revealing that Ruben might still have both musical and political ambitions. The film is a celebration of this living legend and his struggle to come to terms with his legacy.

In 1948, a young Colombian peasant witnesses how police officers murder her husband. A victim of the fratricidal conflict known in Colombia as The Violence, she turns herself out into Sergeant Matacho, first female protagonist of outlaws troops.

A young man must-as a last resort-kidnap his own newborn daughter to prevent her custody from falling into the wrong hands. Outrunning the authorities, he sacrifices his American citizenship and career by retreating to Europe after leaving his child in the care of his close friends in Mexico. Decades later, he must find a way home-whatever the cost.

An actress becomes overanxious in the days leading up to the premiere of her one-woman show.

Singing Our Way to Freedom is a multilayered look at the life and songs of Chicano musician, composer and community activist, Ramon “Chunky” Sanchez. Borrowing from musical traditions on both sides of the U.S.-Mexico border, Chunky uses music and humor as powerful weapons in fighting for social justice. From his humble beginnings as a farmworker in rural California working with Cesar Chavez to the dramatic moment when he received one of his nation’s highest musical honors at the Library of Congress, this character-driven film reminds us that the battle for freedom has to be fought anew by every generation. Director Paul Espinosa will be in attendance for a Q+A after the screening.

A fake Uruguayan Chamber of Legal Marijuana travels to the United States to find 50 tons of cannabis to supply the country. President Jose Mujica is the leader of the mission.

A group of troubled teens from a low-income community break into “Los Ricos”, the local mansion with a border fence, and spend the day pretending to be rich in order to forget their difficult lives.