She's Not Fiddling Around 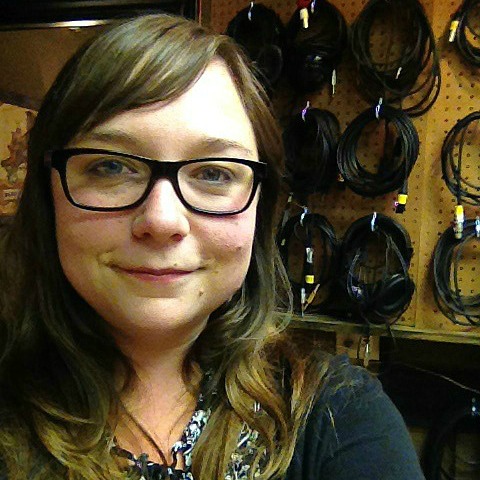 She's not a star outfront, just a talented, respected, in-demand North Texas musician. Petra Kelly has brought her violin's wailing soulfulness or chugging backup to dozens of Texas bands and artists: Hares on the Mountain, Brent Best, Spooky Folk, Jimmie Dale Gilmore - the list goes on. But making a living at it, trying to get her fiddle heard in the band: That's all still part of the job.

Welcome to the Art&Seek Artist Spotlight. Every Thursday, here and on KERA FM, we’ll explore the personal journey of a different North Texas creative.  As it grows, this site, artandseek.org/spotlight, should eventually paint a collective portrait of our artistic community. Follow the Spotlight, enjoy and let us know what you think in the comments section below.

Petra Kelly is not a singer-songwriter. She’s not a band leader, she’s not the vocalist out front. She’s the fiddle player off to the side. Kelly waits for the right moment to pitch in the tonal effects her violin can bring to a song — lift it with ethereal wails or gun it forward, backing up the bass guitar’s chopping rhythms.

So much for all the glamor and the spotlight.

But ask Kelly about the groups and musicians she’s played with in concert or recorded with, and the conversation comes to a brief halt. “I have a list!” She starts digging out her smartphone. “I can’t remember them all,” she explains — she keeps the list on her phone.

And that list covers Kelly’s output only since 2007 because that’s when she first started playing in Denton clubs. In 2003, Kelly moved from a Houston suburb to study at the UNT school of music. She’d been playing the violin since she was six. Her parents even had her grandfather’s violin. But she quickly dropped out, unhappy with the UNT music program, and found work in the finance industry.

Which she came to hate. Kelly much preferred going out to listen to live bands and then trying to convince the musicians that, hey, if they ever needed a violinist, give her a call.

Even with such a long list of bands who’ve worked with her, Kelly says it’s not enough to pay the bills. It’s a fact of life in the music industry, even in a music-bustling town like Denton. Kelly holds down two jobs — law office, waiting tables — plus teaching violin at the Denton Music Workshop.

“You need a flexible schedule,” she says of her day jobs, flexible enough to accommodate playing clubs at night and touring out of town. And that generally means a service industry job. Kelly says she knows North Texas musicians who do manage to work entirely in music. But they’re not simply performing and recording their own music. They’re running sound for other groups, playing in cover bands, teaching, working in studios.

And violinists like Kelly are more of a specialty item in the market — even though her playing style ranges from indie rock to alt-country to what she happily calls stomping, “angry folk music,” the kind exemplified by one of her current bands, George Neal’s Hares on the Mountain. The other group she plays in regularly is Kim Nall and the Fringe, whose lead guitarist, Matt Shasteen, is Kelly’s husband.

Kelly says, with such a life, such a work schedule, she’s had to shift her notions of what it means to be a success, whether she’ll ever live in a ‘super-traditional’ home. But as she also says, you need a passion in your life; otherwise you’re just eating, watching TV and buying things.

So click on the videos — and listen to Kelly’s passion.

When did you start playing music?

I started playing the violin when I was six years old. I lived in upstate New York in Rochester, and there was a music school called the Hochstein Music School. It was pretty incredible. And the Eastman School of Music is right there, so basically [Hochstein] would just grab onto the incredible talent either attending or recently graduated from Eastman [to get teachers for Hochstein].

What music did you listen to when you were young – what music influenced you?

My dad primarily listened to conservative talk radio and my mom listened to show tunes and classical music and opera. So I grew up with Disney and ‘Show Boat.’ And there was some Beatles – that was about where it ended. And then I do remember when we moved to Texas in 1995 when I was ten years old, I started listening to the radio [laughs]. Don’t know why I didn’t do it before, but I heard Alanis Morissette and Green Day, and I started recording those songs on to cassette tapes.

When did you first consider yourself a professional musician?

I first considered myself validated as a musician when George Neal asked me to play in Hares on the Mountain. I felt like a peer – by people who’d been doing what I wanted to do. He has been such a big staple in Denton music. I mean, Little Grizzly had a label! And he’s been playing music in Denton forever.

What have you given up or let go of to follow your love of music?

Do you have any ritual you do before you go onstage or into a studio to record?

You talk about playing with so many bands and musicians in Denton. Is there a sense of camaraderie or is it really competitive?

There’s absolutely no way for me to be the voice of anybody else in this community except for myself. But I would say I feel a sense of camaraderie in Denton. I don’t feel competitive at all. And one of the things I’ve learned from playing music for so long and getting to play with people that I had previously idolized is that that’s an illusion. Idolizing someone or creating the idea that you don’t deserve to do what they do or you’re not a peer is not true.

So I feel like there’s room for everyone to do what they want.

BACK TO THE MUSIC 3: 35 DENTON 2015 with Jimmie Dale Gilmore, Hank Early, Brent Best, Scott Danbom and Petra Kelly from 35 Denton on Vimeo.

Interview questions and answers have been edited for brevity and clarity.