Engineering, speed, art and design - all in one car at the DMA's 'Cult of the Machine.' 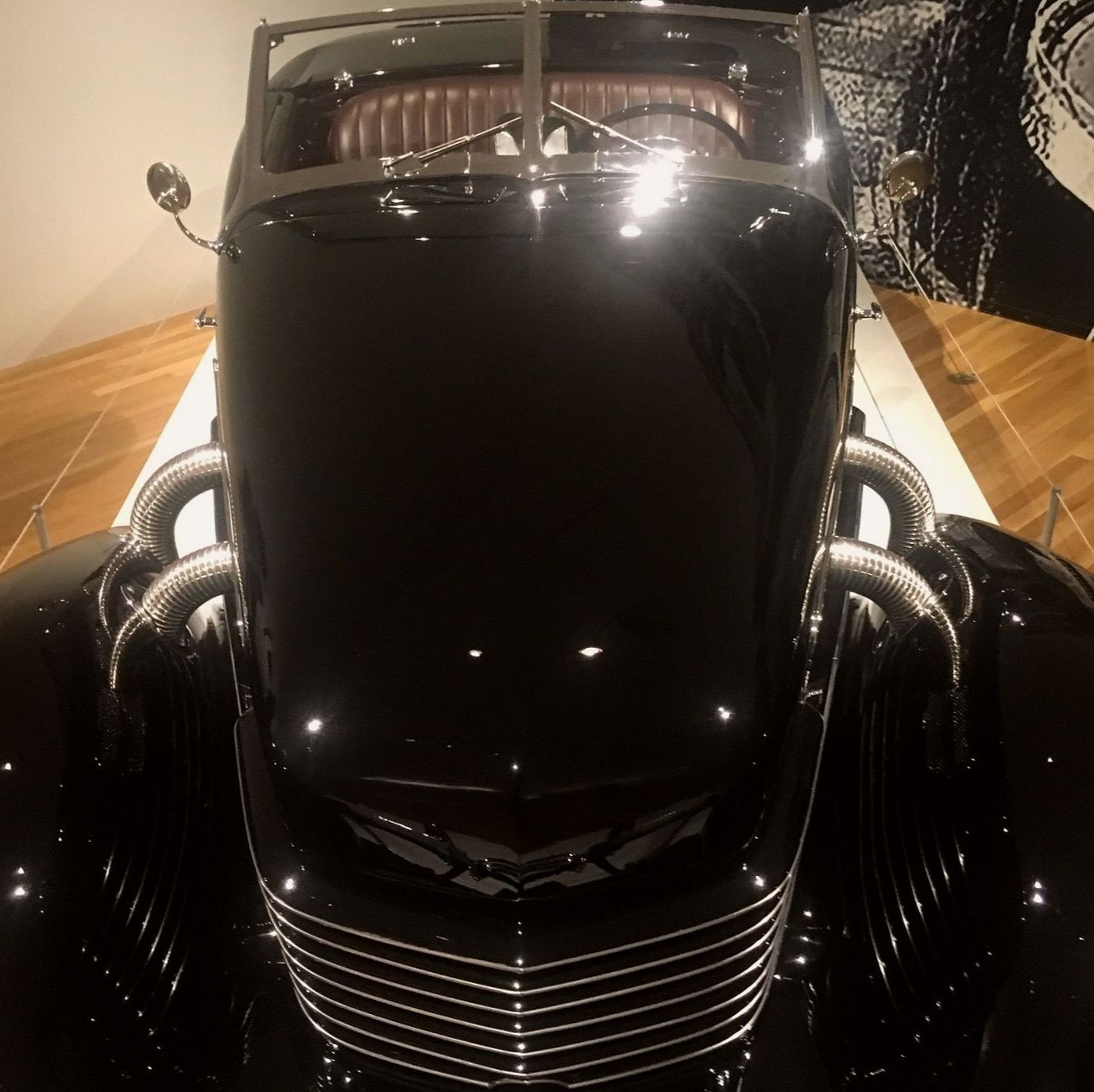 Gordon Buehrig designed such landmark cars as the Stutz Black Hawk and the Lincoln Mark II. But the one he's best known for is the Cord 812 (1936-'37). It was not only stylishly streamlined, it boasted several engineering breakthroughs, including the first front-wheel drive and the first hidden headlights. All were integrated into an Art Deco aesthetic, helped by the fact the Cord was the first car designed using a clay model. This Cord 812, part of the Dallas Museum of Art's 'Cult of the Machine' exhibition, is owned by Arlington entrepreneur Mike Ames.

The Dallas Museum of Art’s current show, ‘Cult of the Machine’ features paintings by Georgia O’Keeffe and film clips by Charlie Chaplin. But Art & Seek’s Jerome Weeks reports what steals the show is a rolling sculpture weighing nearly two tons. And 80 years ago, when that sculpture was new, nothing on the road could keep up with it. It’s probably the DMA’s fastest artwork – ever.

“This is a 1937 Cord Cabriolet, supercharged Cabriolet,” says Mike Ames. “They only built this car for 2 years, 1936 and ‘37. The cabriolet designation really means convertible in today’s parlance.”

‘Cult of the Machine: Precisionism and American Art’ at the Dallas Museum of Art through Jan. 6th

Ames is an Arlington entrepreneur who owns nearly two dozen classic autos. This is actually the third Cord he’s owned, but this black, two-seater roadster is his favorite: “I drive it a lot; it’s a joy to drive.”

Ames loaned the car to the DMA for ‘Cult of the Machine’ exhibition. Ames won’t say how much he paid for it ten years ago, although Cords like it have been auctioned for more than $300,000. That’s partly because there are actually hundreds of different Cords still around, but this model, the 812 – it’s the rarest, the most prized.

You can tell the supercharged 812 from the standard model Cord because of the chrome-plated exhaust pipes snaking out of the sides of the engine compartment. Only the 812 had them. ‘Supercharged’ means the engine has a forced-air system that causes it to burn fuel faster, run more efficiently. It’s somewhat akin to a ‘turbo engine’ today. Its supercharged V8 engine was why the 812 topped out around 110 mph – making it one of the fastest, factory-built cars at the time. For his part, Ames says he’s gotten his car up to 80 mph, which is fast enough for driving around in a rare masterpiece. The real threat to the car these days, he says, is from people wanting to take a picture of it. With their cellphones. While driving.

But the primary reason the 812 is valued is its brilliant fusion of design and engineering. The Cord is cited as one of the most striking, innovative cars ever built. Just standing still it projects a sleek muscularity – from its ‘coffin-nosed’ hood and louvered, wrap-around grille to its tear-drop wheel wells. Comic book artist Bob Kane even used the Cord in 1941 as the model for the very first Batmobile.

“It was a great exercise in style,” Ames says. “It was designed by Gordon Beuhrig [who also crafted the Auburn Speedster and the Lincoln Continental Mark II], and that was back in the days before any kind of computers. It was the first car ever designed using a quarter-sized clay model to start. It was all done as a piece of artwork. In fact, there’s a book about the car called ‘Rolling Sculpture.'”

The DMA’s show displays ‘Precisonist’ art from the 1920 and ‘30s. Precisionism was a loose, very American movement. It absorbed European, avant-garde trends – like the sharp, geometric edges of Cubism and some of the impulse behind Italian futurism, which was obsessed with everything fast, mechanical, violent and revolutionary (which is why a number of its artists ended up joining Mussolini’s Italian fascists).

But where the European schools represented radical breaks with tradition – they wanted to ‘force the new’ into being – Precisionism often still looked solidly realistic. That’s partly because the ‘future’ was already here. Precisionism wasn’t so ga-ga for gadgetry because, around the world, America was already seen as ‘the country of the future’: The Empire State Building (1931) was the tallest in the world. The Ford River Rouge Plant was the largest industrial complex anywhere. We’d invented air-conditioning, the Tesla coil, the filing cabinet and the gas chamber. So Precisionism often focused on how the streamlined and the mechanical were already parts of our daily lives. For good and bad.

“America is this vast country and it’s industrializing faster than any other place,” says Mark Lamster about the United States in the ’20s and ’30s. Lamster is the architecture critic of ‘The Dallas Morning News.’ “And so architects are coming from Europe and they’re inspired by the grain elevators, by the bridges, by this American industrial architecture.”

Lamster has written ‘The Man in the Glass House,’ a new biography of architect Philip Johnson. Johnson designed the Amon Carter Museum in Fort Worth and the Crescent in Dallas. Johnson is important in Precisionism because he curated a 1934 show at the Museum of Modern Art in New York called ‘Machine Art.’ It was revolutionary, the first art show to display mass-manufactured products as if they were one-of-a-kind paintings.

“Designed objects had been in museums before,” says Lamster, “so you’d see like vases and chairs in period rooms showing us a salon at Versailles. But the idea that every day, industrial objects could have artistic value – you know, an airplane propeller, ball bearings, a waffle maker – that was what was being presented as art.”

Which brings us back to the automobile at the DMA. Philip Johnson loved the modern, the sleek, the machine-made. Not surprisingly – Johnson himself owned a 1937 Cord Cabriolet.

Mike Ames can rattle off a list of the Cord’s many innovations:

In 1932, Cord owner E. L. Cord (who also owned Auburn and Duesenberg) made the cover of Time.

So with all these gizmos integrated into the design, just how ‘advanced’ was the Cord? No other factory-built car came equipped with both standard front-wheel drive and retractable headlights for 30 years. And when that new, ‘revolutionary,’ full-size luxury car arrived, the 1966 Oldsmobile Toronado, it had hubcaps with circular holes lining the rim – a tip of the hat to Beuhrig’s own design on the Cord’s hubcaps.

Unfortunately for us at the DMA, Ames can’t fire up his car’s Lycoming V8 engine. Fire safety regulations. When put on display indoors like this, cars are drained of fuel and oil and their batteries are disconnected.

But perhaps standing still like that,  unable to move – it’s only fitting. As the DMA’s show on Precisionism indicates, there are downsides to innovation. The Cord was a huge hit with the public. And it more or less killed the company.

“When they first introduced the car,” Ames says, “the response was so great, they got orders beyond their ability to produce. And they had some issues with some of the technology, so they were not able to deliver on time.”

Today, as a still-functioning antique, Ames’ own Cord does have some of the old-car drawbacks that are true for many vehicles from the era: Brake technology, for instance, hadn’t kept up with a supercharged car’s speed. If you went fast enough and applied the brakes long enough, they’d overheat and freeze up. The Cord also wasn’t designed – as today’s cars are – to sit in boiling hot, bumper-to-bumper freeway traffic for hours. So its engine can overheat – which is why many Cord owners have installed an extra fan in the engine compartment. And the convertible roof is still a complicated, Tinker-Toy operation to get up or down. But the Cord was the first car to have a ‘ roof storage trunk’ with a streamlined ‘lid’ – where the convertible roof retracts out of the way. Again, another stylish touch.

As Ames says, the Cord was like a comet from the future. It burned brightly – but not for long.

We’re lucky to catch one at the DMA.