The Things We Carry

Longhui Zhang came from China to Denton to make art. Turns out the journey was just as important as the destination. 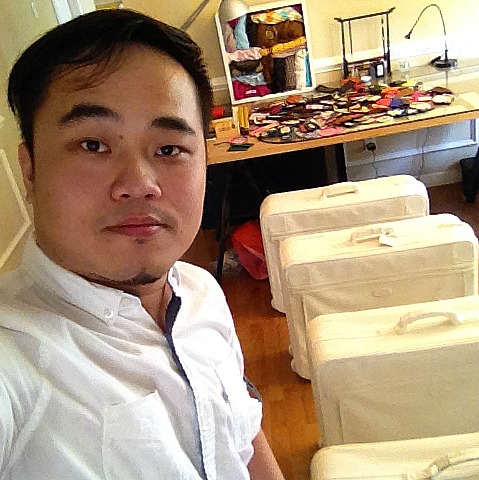 When Longhui Zhang came to North Texas in 2011 to study art at UNT, he'd already been trained in traditional Chinese techniques of watercolor and drawing. What he wasn't expecting was a) how flat and empty North Texas looked compared to his native Quanzho. And b) how he'd end up making performance videos and abstract installations about luggage, immigration and the American Dream.

Welcome to the Art&Seek Artist Spotlight. Every Thursday, here and on KERA FM, we’ll explore the personal journey of a different North Texas creative.  As it grows, this site, artandseek.org/spotlight, will eventually paint a collective portrait of our artistic community. Check out all the artists we’ve profiled.

Enjoy, and let us know what you think in the comments section below.

Five years ago, Longhui Zhang [pronounced LAHNG-way JAHNg] flew from China to Denton — his first time outside China. When he landed at DFW, North Texas was not what he expected. He wasn’t expecting a Hollywood Western, but this certainly didn’t look like New York or LA, either.

“Especially when you drive out from DFW area to Denton,” he recalls, “it’s nothing there, and you only see a couple cows on the farms, right? So I was like, ‘Dang, where is this place?’ It’s like a country town. It’s flatter than China!”

Zhang could have chosen colleges on the East Coast or West Coast, so he was concerned he’d made a serious mistake. You need to understand: Most Americans haven’t heard of it, but Quanzhou, the city where Zhang grew up has 8 million people – that’s six times the population of Dallas. Shanghai, where Zhang attended one of China’s top art schools? It has 24 million, three times the size of New York City.

So Zhang’s initial disappointment with what looked like flat, empty North Texas was understandable. These days, he says, when he picks up new Chinese students at DFW, their confusion can feel familiar. “They’re all like, ‘Am I coming to wrong place? Am I making my wrong choice?'”

That entire experience of immigration, dislocation and ‘misinterpreting the American Dream’ has become central to Zhang’s artwork. He’s earned an MFA in art and earlier this year won a Nasher Sculpture Center micro-grant. He’s had shows in Shanghai, Denton and one coming up this fall in the Dallas gallery, SITE131.

Zhang’s best-known works involve luggage: luggage straps, luggage keys, luggage tags. He’s arranged them like minimalist, abstract collages [see the installation video of MFA exhibition, below]. For a performance video called “I Can’t Even,” he got fifty old, empty suitcases, painted them white, and with friends, he drove them out to an open field near Lake Ray Hubbard. He tied them together and then tried to drag them up a small hill.

“I thought I’d be able to pull all of them,” he says. “When you pick up each single one, it was light. But when you pull fifty of them together, you cannot move even one inch. Not one inch.”

He ended up hauling two dozen bags through the grass. Zhang says the video obviously draws on some of his own experiences and frustrations at the time, but that image of him is surprisingly universal. It evokes fleeing refugees, college kids moving away from home. Or all of us simply dragging our histories and burdens behind us.

But video performance isn’t the kind of art Zhang actually expected to create at UNT. Zhang says he comes from a “very traditional Chinese family.” In fact, his parents were not keen on his pursuing art at all — they wanted him to go into business. It was his admission to the China Academy of Art that was the “big turn” in his life, he says, allowing him to pursue his love of drawing and painting. And what Zhang learned at the academy were China’s venerable traditions of watercolor, design and portraiture.

“All you learn about in Chinese art school is traditional, representational art work: portrait, still-life work,” he says. “Yes, they do have contemporary art in China right now, but it’s not growing as fast as here. So when I came to UNT, I didn’t expect I would study contemporary art. I was expecting, I’m gonna be a better painter. But that’s life. You never know what’s going to happen next.”

Actually, in a compromise with his traditional parents, Zhang got a bachelor’s degree in web and animation design. But in grad school, he returned to realistic painting.  And then, under the inspiration of his advisor, Annette Lawrence, he moved into abstraction, then video art, performance art, conceptual art, all the contemporary forms he explores now. He was challenged, he says, encouraged to combine his cultural background with different forms.

It was kinda like how he came to appreciate the flat Texas landscape, all that wide, open space that first worried him.

“The reason I love here is because of big land, it’s so broad,” he says. “And it somehow open up your mind because it is totally different from where I come from.”

Zhang says that, like many young people in other countries, he was continually told America was the land with streets of gold. It’s not true, he says. It’s one reason he’s made the “misinterpretation of the American Dream” his subject. He’s found he’s actually had to work hard: He teaches classes at both UNT and North Central Texas College — as well as tutoring some sixty private students, teaching them classic Chinese watercolor techniques. And that’s in addition to all of his art projects.

Both Zhang’s parents now live with him, along with his new wife, Junting Cai. So because Zhang speaks English better than they do, he’s also the dutiful son, the family translator. All of them live in a rented Plano home with Zhang’s artworks everywhere, along with his video and computer equipment. When Zhang’s father — who was in the construction business — saw the many white-painted suitcases, he advised Zhang, they probably didn’t need anymore.

“My father has always supported me,” Zhang says. But it took him awhile to comprehend Zhang’s art projects as something substantial — when the gallery shows and calls started coming.

As hard as being an artist may seem in the United States, being an artist in China is harder, Zhang insists. There’s still relatively little market for contemporary art like his. So basically, Zhang’s story is a classic immigrant story: For him, America has meant struggle and work and cultural confusion but also opportunity, expansion, self-expression.

Two years ago, at a yard sale in his Plano neighborhood, Zhang met a former DFW employee who collected things left behind in the airport. Zhang got bags and bags of luggage tags. He pours them out on a table, hundreds of them, tags made like footballs, tags like M&M cartoon candies, tags from Germany and Japan and Brazil, tags with college logos, tags that read ‘Sorry It’s Mine!”

“Two years ago, I did not know what to do with them,” Zhang says. “But the material was so rich.” Now he knows. For his Nasher project, he’s going to track down ten people in this area and videotape them as they’re reunited with their lost luggage tags.

On the other hand, Zhang says, his father keeps asking. When is he going to get back to painting portraits?

When did you first think of yourself as an artist?

So I do it just like a hobby, weekend stuff – until school, when I stop. I come from a very traditional Chinese family. The family told me not to do that – because it’s not going to give you any money.

Longhui Zhang and his family in Plano: His mother, Congling Ye; his wife, Junting Cai; Longhui and his father, Shisheng Zhang. Those are some of the luggage bags Zhang dragged in his ‘I Can’t Even’ video.

So how did you get into the visual arts?

Well, actually, I was lucky. I went to China Academy of Arts, which is one of top three art schools in China, and I studied design. I think 90,000 apply to get in.

And that was the break with what your family wanted you to do?

It was a big turn. If I didn’t get accepted by an arts college, I might not do art anymore. My parents might ask me to do something else.

When you applied to art schools in the US, what made you choose UNT?

I was just looking around at the different states, East Coast or West Coast. My mother actually told me that, since this is the first time ever when you’re out of the country, why not go somewhere close to your aunt [who’d moved to Dallas in the late ‘90s]? She could help you. And actually she did, she help me get settle down. She’s kind of the point person that link my whole family to this area.

Do you have any rituals you go through before you start on your artworks?

[The short answer is no, he’s too busy.] I feel like I’m the person who likes challenges. So if I’m taking a week or a summer off, it just feel like my mind is empty.  But the more stuff going on, and keep you busy, and keep your hands busy, and not necessarily stuff your mind is doing, your mind might be somewhere else but you’re doing this sort of stuff.  I always got a lot of things going on at the same time.

So in those traditional terms you mentioned before, do you think of yourself today as a painter or an artist?

I’m more an artist. More like an interdisciplinary artist rather than painter.  I’d prefer to be called an artist. It’s not one is higher than the other. One is more general, and a painter is just a painter. I love to be a painter. But outside of painting, I want to do a lot more stuff.  I never thought I can do this, I can do this as a living, as a job, the contemporary art stuff. In China, contemporary art is growing fast, but a lot of the stuff I’m doing now, in a lot of areas, it’s still pretty new.

Are you creatively satisfied? Is there work of yours you’re happy with?

To be honest, I love doing video stuff, shooting a film and then edit it. I love my performance [art]. I just so appreciate that eventually that somehow I can connect to my background, to my past.

Questions and answers have been edited for clarity and brevity.